The road to HF is a long one, unless you possess infinite knowledge and financial resources. I can tell anyone reading this that I possess neither of those attributes, and that going from zero to HF has been one of the most difficult, yet fascinating of the personal quests I’ve attempted through the years.

How I got to this point isn’t important, but in a nutshell, seven months ago some portion of my brain told me I needed to get involved in ham radio. I don’t have a background in electronics or any of the sciences. I was educated as a journalist, and later as a media artist, with photography as my discipline of choice.

I received my Technician license in August 2011. It took me more than three months to figure out what to do next. Studying is cheap, so I went ahead and earned my General and Extra certifications. I started making friends with the locals on the repeaters, began attending meetings of the Columbia Amateur Radio Club and volunteered for any and all club-sponsored activities that dealt with radio.

Up until this weekend, my experience had all been on my VX-7 handheld on the VHF/UHF bands (with the exception of a brief experience working the 40 meter station on SPAR Winter Field Day). I’d purchased a Yaesu FT-847 from a local ham in January (unaware of the cult following this rig has), and I was eager to get it on the air, because the HF bands seemed to represent the heart of the hobby.

But buying the radio is probably the easiest part of getting started on HF. There was the matter of the antenna, which one to buy, where would I put it, where would the feedline go, how to get the feedline into the house, what power supply to purchase, how to ground the rig, what antenna tuner to purchase, what mic should I get … and so on and so on.

Early on in the hobby, I discovered the importance of listening — listening to the airwaves, and listening to advice from guys who have been doing this stuff longer than I have been alive.

The second major lesson I’ve learned is patience, because getting on HF doesn’t happen overnight. In my case, multiple weekends were spent getting the shack ready, acquiring all the bits and pieces to make the rig work with the other components, installing software, etc. I spent a weekend clearing a portion of a swamp behind my home to make room for my 145-foot long dipole, and that was the easy part. 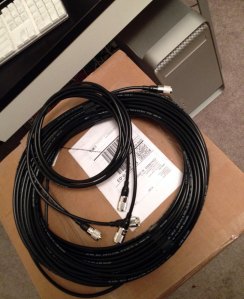 But this weekend, after connecting my final run of coax (Thanks to The Wireman for their advice and speedy delivery!), everything finally fell into place, and the HF bands opened up, glorious in their depth and breadth, and equally as chaotic and frightening.

I only logged seven contacts over the weekend, but these were seven hard-earned contacts!

My first QSO is one of the rarest of ham radio contacts: a female. K5IJ was working the Mississippi QSO Party and I heard her signal booming into South Carolina on 40 meters. I threw my call out and received a 59 report, then backed out to let the pile-up continue.

Next up was CO6LC out of Cuba. He was issuing a very strong signal on 20 meters into the southeastern states and after waiting my turn in the pile-up I threw out my call. My jaw hit the floor as he responded with a perfect copy on my call and I received a glowing signal report. Then I realized my power was only set at 50 watts! Is Cuba considered DX?

I worked two more stations from the Mississippi QSO party, AG5Z and W5OBM, both managing pile-ups on 40 meters. I had a very difficult time working AG5Z as there were many operators trying to get in on the action. I was patient, as I had nothing better to do. I received a 59 signal report, although I did have to repeat my call multiple times thanks to the QRM.

I discovered a group of locals on a 80 meter ragchew at 3.950 and spoke with them for a while until QRM from my barking dogs and a problem with my rig getting stuck on transmit forced me to back out.

I took a break for several hours, but ventured back into the shack around midnight in hopes of making some sort of “special” contact before heading off to bed. I was about to give up when, as I trolled 40 meters on SSB, I heard a weak station, WS4B, calling CQ. I  managed to copy his call and looked him up on QRZ, only to discover he operates almost exclusively on AM.

I switched my rig over to AM and boom! WS4B, Gary was coming through with a nice warm, powerful AM signal out of Florida. We held an extended QSO/ragchew on the merits of working AM and the pitfalls of contesting. I learned something and made a friend in the process! I’ll probably look into doing more AM work in the future.

Sunday morning I switched on the rig and ran the dial up 10 meters. I listened to a big signal out of Germany, but never punched through the substantial pile-up. Eventually the operator grumbled that everyone needed “something better than 100 watts and a wire.” I moved on to 20 meters, where I listened to operators from Italy, France and Spain.

I only logged two contacts on Sunday, but I’ve very proud of one of them: N5C, a special station honoring the 80th birthday of Johnny Cash, was busy on 40 meters, but persistence and patience paid off as I finally broke through and got on the log.

I also dropped by the North Carolina QSO Party with a brief exchange with K4LAL.

I closed the evening with a nice long ragchew on 80 meters with local club members and friends: W4RWL, KF4UOR, KV4BL, AE6E, KI4WZG, and “the man with the 1000-watt voice,” KJ4TL.

All in all, a great weekend to finally get on HF!