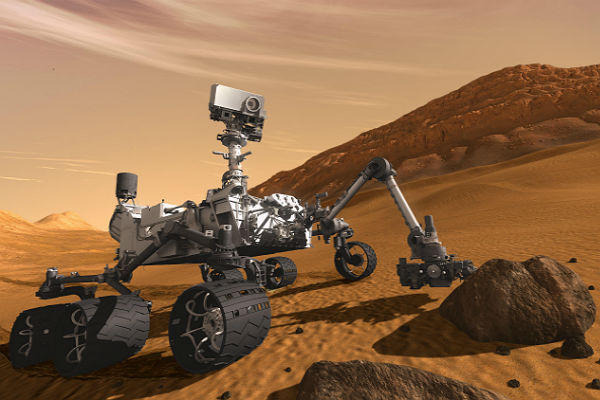 Like many other science geeks, I stayed up late to watch the Mars Curiosity rover touch down on the red planet early Monday. I’m still suffering from a lack of sleep, but that hasn’t lessened my enthusiasm and interest in the new Martian rover.

One of my favorite moments of the descent was when the mission controllers used the UHF antennas on Curiosity to transmit telemetry up to the orbiting Mars Odyssey satellite, which in turn, relayed the data back to Earth, allowing us to get that “real-time” (but delayed by distance) information on every stage of the landing.

Not that long ago, I wouldn’t have understood much of that. But now, having learned about the UHF band, listened to satellite downlinks from birds like ARISSat-1, learned a bit about space communications, transponders, repeaters, antennas, and radio wave propagation, I was able to enjoy the landing that much more.

CW operator? Did you know that the Curiosity rover is leaving imprints of Morse code on the surface of Mars? Code spelling J-P-L (.— .–. .-..) is imprinted on the rover’s tires.

I’m encouraging a close friend of mine to take his Technician exam, and he’s started studying, but hasn’t committed to getting the license. I knew he was watching the Curiosity landing, so I e-mailed him immediately after touchdown and asked him if he’d watched Odyssey become a “repeater in space” to relay Curiosity’s telemetry and images back home. I hope that got him a little more excited about getting his license.

I think opportunities like the Curiosity landing are a great time to highlight the “magic” of radio. A cheesy sentiment, yes, but it’s true. Without radio, we wouldn’t have a space program. Just knowing the small amount I know about radio, got me very excited to learn more about the systems NASA uses. Fortunately, NASA makes all that information available to the public in beautifully illustrated technical manuals.Want to know all about how data is relayed from the surface? Have a look at this PDF on Mars Reconnaissance Orbiter Telecommunications. It’s deep, complex stuff, but utterly fascinating.

I’m still amazed Voyager 1 and 2 are out there, 35 years later, quietly sending signals back to Earth. I’m equally amazed that a group of hams received a signal from Voyager 1.

Seems like if the hobby wants to help itself, mixing ham radio with space exploration would be a good strategy. One of the reasons I entered the hobby was because I heard you could talk to astronauts on the ISS. I’ve never been successful in that endeavor, but in being exposed to radio, I’ve enjoyed meeting an incredible group of hams locally. I’ve discovered the world of HF, contesting, Field Day, and the list could go on and on.

Use the Mars landing to advocate for ham radio. After all, someone is going to need to build space radio systems in the future. Might as well be a ham.