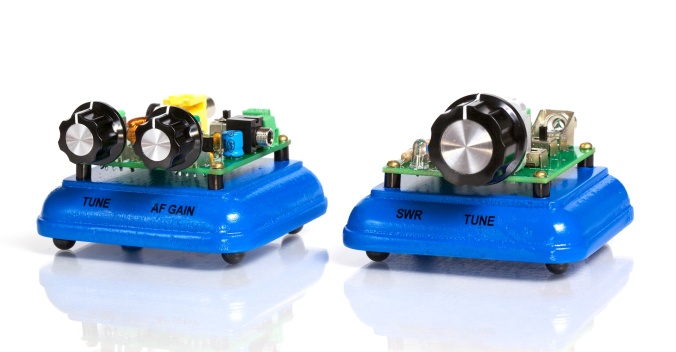 Here I am, back at it with the kit building… Last week I tackled a Breadboard Radio classic, the Sawdust 40-meter regenerative receiver, and one of Bill, W4FSV’s newest offerings, the Matchstick QRP tuner.

Building on the success of his original rig, the 40-meter CW-only Splinter (Read my account of that build), Bill has crafted a nifty little antenna tuner that can be quickly constructed in an evening with minimal skill. There isn’t a lot to say about the build. It’s simple. The only issues I encountered involved mounting the coax jacks because the components were a very tight fit onto the board. Slightly crimping the ends of the mounting hardware with a pair of pliers made them slide into place nicely.

The Matchstick is pretty simple: Send a carrier and turn the tuning knob until the LED is at its dimmest or off.

This kit has a simple toroid. I’d never wound a toroid prior to this assembly and I found it straightforward enough. I used a knife edge to scrape the enamel off the magnet wire leads that were ultimately soldered onto the circuit board.

Using the Matchstick is dead simple. Attach it inline with your rig and antenna like any other tuner. Key up and turn the Matchstick’s tuning knob until the SWR LED reaches its dimmest level. Since I was running my rig on a somewhat resonant antenna, I was able to tune until the LED went off completely. Straightforward enough. Be advised, the Matchstick only works on the 40 meter band and it isn’t suggested for use with balanced feed lines.

Moving on to the Sawdust:

This one is a little trickier. Perhaps it was my own poor decision to begin my Sawdust build at 10:30 p.m. Saturday after I’d already had a long day that started early. Plus, I’d only slept about two hours the night before having arrived back in town from a road trip. So I was already bleary-eyed when I began the process of winding the more complex toroid on this little receiver.

The toroid actually consists of three windings. One is 24 turns of wire to put the rig in the 7 mhz range. On the same toroid, we then have the five-turn “tickler coil” to provide regeneration. A third three-turn wind couples the toroid to the antenna. That’s a good bit of intricate winding onto a rather small magnet. My first attempt at the 24-turn winding went OK, until I realized I had the wire winding in the wrong direction around the magnet. Dang! Fortunately there was enough wire included in the kit to do it over.

A tickler coil makes for one sexy toroid!

Instead of scraping the enamel off the leads, I decided to use a butane lighter to char the enamel off, then hit it with fine grit sandpaper. This method worked great. I made an effort to tin the leads as well and somehow got the whole thing mounted and soldered in without much fuss.

I moved on to the rest of the components, starting with capacitors. I was on my last cap when I realized it was a “102” rather than a “104” cap. I checked my work and realized I’d soldered in the 104 cap in the wrong place. It was the first component I placed on the board and it was in a tricky place. I would need to desolder it, and I’ve never really done that before. A lot of profanity, a lot of heat and a lot of work with needle-nose pliers, and I had the part free.

I was down to my final two resistors. One was brown-black-orange and the other was brown-black-green. The problem is, I’m red-green color blind and they both looked virtually the same to me. By now it’s nearly 2 a.m. and my wife, who typically helps me sort resistors, was fast asleep. Unfortunately I didn’t have a VOM handy to test the resistors. I’ve since acquired one, since it was needed to test the toroid before final assembly. The final resistors would need to wait until morning.

At some point during this build the tip of my brand-new soldering iron degraded into a blunt instrument, rather than the nice pointed tip I’d enjoyed through the previous kit builds. I believe a combination of over-use of the sponge and dragging the tip across cardboard to remove excess solder probably ruined it. For some reason I’ve never been able to tin the tip of this iron without the solder beading up in a big glob, which even the sponge won’t remove. I’ll be taking KB6NU’s advice from now on and using a wire pad. Once I buy some new tips…

So once I had this thing together it was time to align it. There are about three methods to accomplish this, but I opted to use my FT-817 to send a CW tone at 7.040 and try to spot the Sawdust’s center frequency to the 817. I think I was somewhat successful, as I can tune around and hear CW. During my tweaking, I was able to pick up an AM station with varying degrees of clarity.

So, three kits down and hopefully more to come. Something from Elecraft perhaps?

The QRPp kit station at present. From left, the Matchstick, the Splinter, my Ameco key, and the Sawdust regen receiver.