When I was a kid I used to devour the old Archie “double digest” comics. Maybe it was because we are both redheads — but mostly because hanging out around the magazine and comic section of the supermarket gave me something to do while my parents were shopping.

That was back in the early 1980s. I’d largely forgotten about Archie comics until Monday of this week. In the past few weeks I’ve started “getting into” comics and graphic novels, mainly classic superhero stuff from DC, Marvel, and various indy publishers, like Image.

I’ve been trying to convince my buddy Stewart to join me in ham radio for some two years now. On Monday he texted me:

As a matter of fact, my birthday was that very day.

“No kidding? This was meant to be. Come by when you get a chance.”

I was intrigued, and stopped by his home after work on Monday. He produced a large box full of comic books, mostly stuff from the 1990s.

“I found this up in the attic today.”

He dug around in the box a bit and unearthed this gem: “Archie’s Ham Radio Adventure.”

I just about fell over. Without a doubt, one of the coolest birthday presents ever.

Published by the ARRL around 1986, Archie’s Ham Radio Adventure is a nice survey of the amateur scene of the mid-80s, apparently intended to draw young people into the hobby. The book specifically touts ham radio’s role in EmComm, the then-exciting technology of packet radio, UHF and above (“1.2 gigahertz — a funny word with a big future”), space communications via OSCAR and EME, the “secret code” of CW, the inexpensive nature of the hobby (I keep hearing about how inexpensive this hobby is, lol), and of course, the ability to talk to hams around the world. 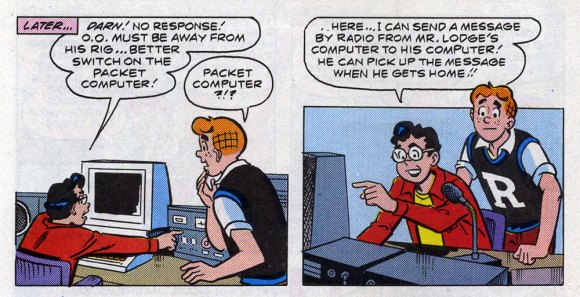 It’s neat stuff, all rolled into an absurd adventure story that ends with Archie saving the day when he lobs a weighty handy-talkie at the antagonist’s head. Political incorrectness also ensues (“he’s fast for a fatty!”), the character Dilton scores points with Veronica and Betty for being a packet wizard (seriously?!?) and we learn Veronica’s dad apparently has the hamshack of the gods.

I regret I never had the chance to read this when I was a kid, as it probably would have inspired me to be a ham at an earlier age, provided I could pass the code requirement of course. The ARRL did a solid job on the book, and includes a code chart on the back cover that uses the sounds (dah-dit, di-di-di-dah, etc.) rather than the common practice of dot and dash notation.

I’m including a scan of the book in case anyone would like to check it out. Hopefully the ARRL doesn’t mind! It’s really a cool fusion of comic culture and ham geekery. Although I have to think “Batman’s Ham Radio Adventure” would have been a little cooler…

EDIT, April 22, 2020: I was recently contacted by Ira, KB3I, who ran across the Archie comic here on my site. He mentioned he’d recently purchased a “new-old-stock” copy of the Archie comic at an antique radio auction. Inside his book, he discovered a pre-paid postcard offering a free membership to the “Archie Radio Club.”

“What knocked me over, is that the card is prepaid and pre-addressed to the ARRL. Joining the ‘Club’ gets you a membership certificate, an Archie Radio Club sticker, and a band chart.”

He also included scans of the postcard. Very cool stuff indeed. I wonder if the ARRL is doing anything like this nowadays? 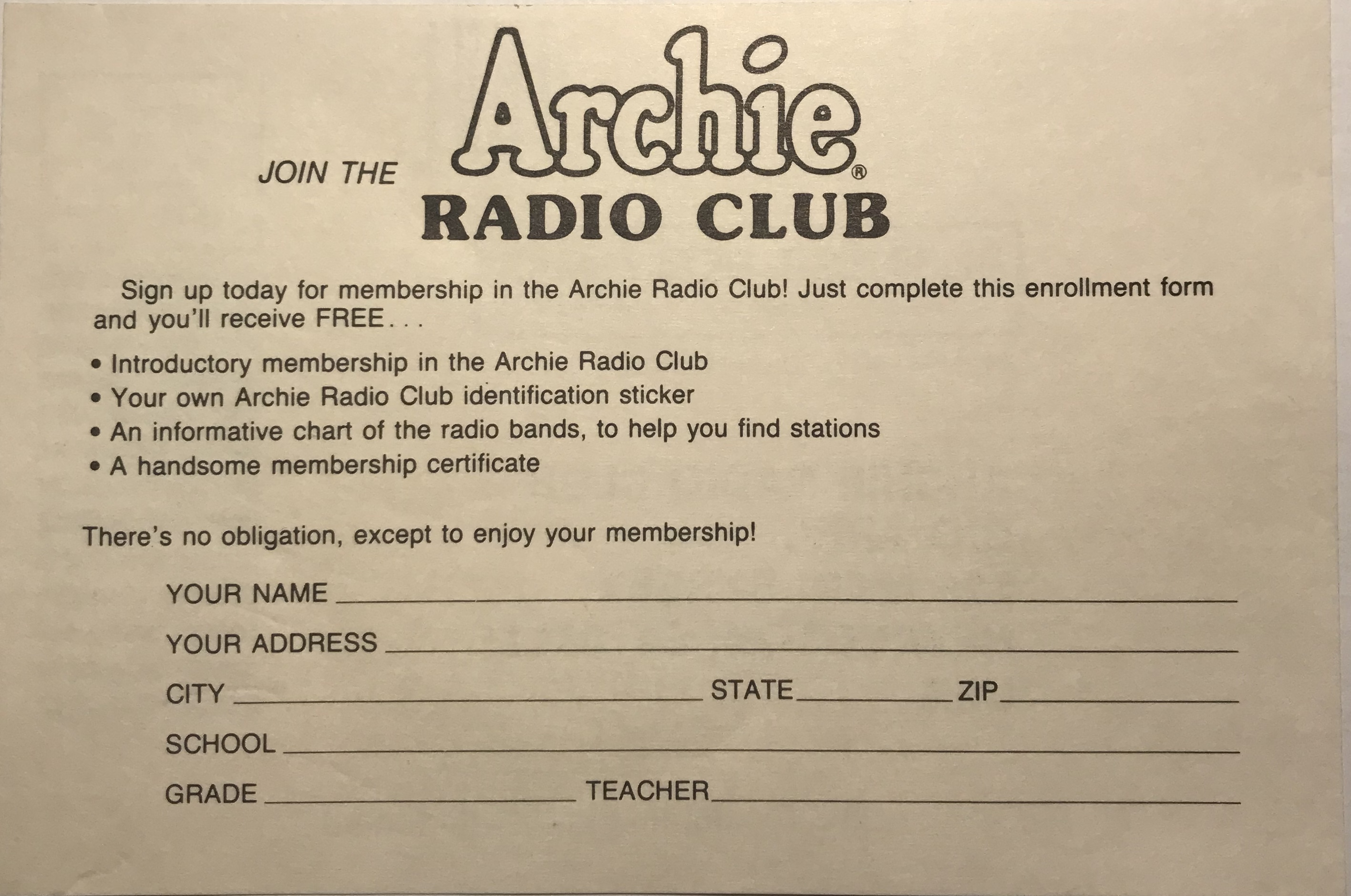 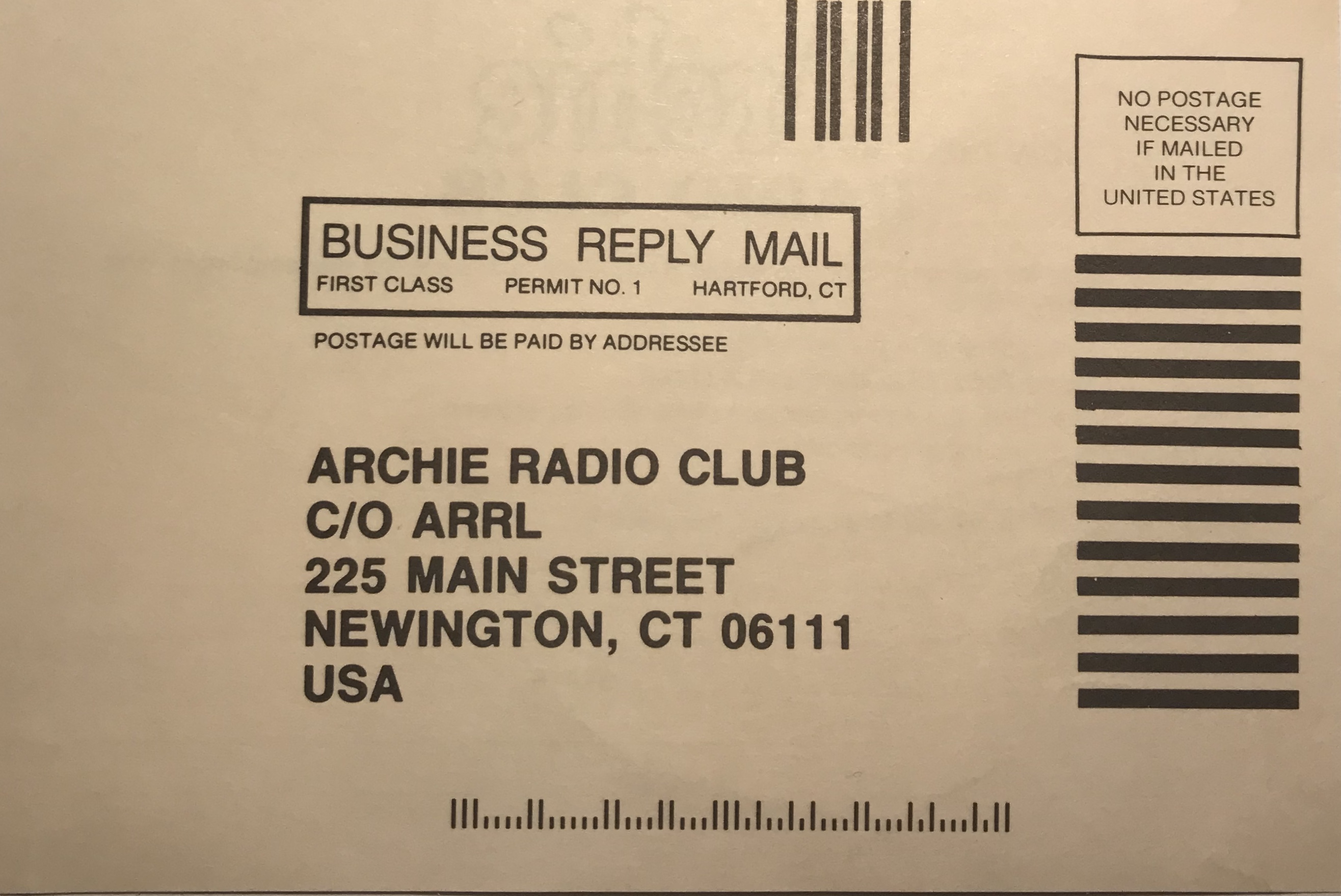 Very cool stuff Ira! Thanks for writing and for the scans! That really completes the story of Archie’s Ham Radio Adventure!