All the parts I needed to install the FT-8800 in my 2012 Ford Focus hatchback arrived Thursday evening last week, and I was fortunate to only work a half-day on Friday, so I headed home around 1 p.m. determined to get up and running.

First order of business: Wash the car. It had been a long, cold and icy winter down south and as such, it had been months since I washed my car. No way was I going to stick a nice shiny new antenna on a dirty hatchback. I apparently jinxed myself by washing the car, as I will explain later.

Second order of business: Run some 12 gauge wire through the firewall. I followed this guide on the Focus Fanatics forum, but I didn’t have to pull out my glove compartment or any other interior trim. I located the wire harness grommet on the upper, passenger side of the firewall, just behind some A/C piping. The grommet  is probably about 4-5 inches in diameter, and actually pretty thin. I used a small pen knife to make an incision in the grommet and worked in the wire. I then had to sit on the ground beside the car and reach up under the glovebox area to grasp the wire. I pulled it through and ran it under the sills/trim panels, where there seemed to be a pre-existing pocket made just for this purpose. The trim is easily loosened by pulling up on it, and snaps back together just as easily. I didn’t have to remove any, just loosen it enough to feed the wire underneath.

I planned to store the rig under the passenger seat, and there was a convenient spot where the wire easily exited the trim, so I routed it under the front passenger seat and safely out of the way. I connected the wire directly to the battery terminals and tidied up the run of wire with some zip ties.

Next up was the mount for the radio’s control head. I went with the Lido Seat Bolt Mount, which was easy to install, although not a perfect fit on the Focus. The seat bolts on the Focus are set in deep “pockets” for some reason and the Lido mounting bracket wasn’t quite deep enough to fit perfectly in that pocket. But it is, as they say, “close enough for government work,” and once everything was tightened down, everything was fine business.

I had to stop working on Friday to go attend to a family matter and planned to install the antenna upon my return. The weather had other ideas, and suddenly black clouds replaced the blue skies of what had been a 93-degree day. That’s what I get for washing my car! I was further surprised by golf ball-sized hail that came later. The next morning, I was dismayed to find my car had suffered a broken side mirror as a result of the hail, and it looked like someone had taken a ball-peen hammer to my hood and roof. 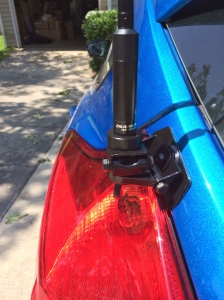 A detail of the Comet mount in action.

I went ahead and put the antenna on using the Comet CP-5 NMO mount. The antenna I selected is the Diamond “radialless” 2m/70cm half-wave whip and so far it seems to be working quite well. The Comet mount works quite well, and I was able to mount it slightly higher on the hatch than I previously thought. The antenna looks great up there too. I tested the rig with a variety of repeaters around the area, and worked a buddy of mine on VHF simplex for good measure. I’ve been able to receive some repeaters that are 40+ miles away from my low position in northeast Columbia, so I’d say the setup is functioning at an optimal level.

It had always been my intention to install a mobile rig in the Focus, but a lack of knowledge on how to actually accomplish the task had always stopped me. As the car has no flat surfaces, and very little extra room, it had been my belief that there was no good way to install a rig in this car that didn’t involve some heinous modification. I was wrong of course. Thanks to advice from some local guys, and the online inspiration and help from KK4JDO, I was finally able to make this happen. As we say, time, patience and perseverance will accomplish all things…

Is the setup perfect? No… Because I have a manual transmission, I have to set the head of the rig farther back to allow me the room to shift into 5th gear and reverse. That means it leaves the passenger very little room. BUT, I can easily remove the head if needed, and pull the gooseneck back out of the way, or as one of my Twitter friends suggested, “put the passenger on the radio.” Hehe. The best part is that everything is easily removed, and as I occasionally have to transport an elderly family member and bring along her wheelchair, this will allow me to quickly free up space.