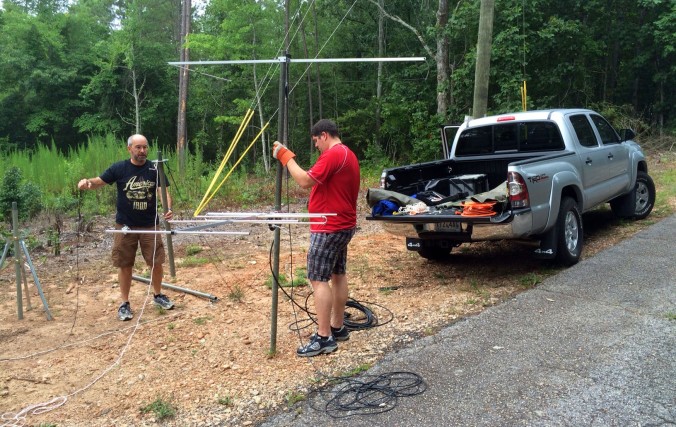 Setting up the 6m and 2m antennas.

Apparently there was some kind of big deal happening up in Hartford, CT, this past weekend, that all the ham radio hipsters, the ham-famous, and #WATwitter crowd attended. I personally don’t have time for such trifles, and instead spent a few solid evenings honing my RTTY skills and operating as W1AW/4.

To further extend the fun, I was invited to go along on a little excursion up to the summit of Little Mountain Saturday, where we attempted to make some VHF contacts as W1AW/4 for the purposes of submitting a check-log to the CQ WW VHF Contest. The field day-like excursion was the brainchild of Todd, KN4QD — a master telegrapher and occasional Twitter celebrity. We were also joined by “Short Time” Steve, KI4VGA, my occasional CW study partner, and an antenna whisperer in his own right. My job was basically to secure food and drinks.

We pressed my 6-meter moxon antenna into use, along with an InnovAntenna 5-element 2-meter Yagi, borrowing some military surplus fiberglass masts and a 2-meter amp from the “Coca-Cola Kid” Ronnie, W4RWL, the president of the mostly fictional ARMs MC — a motorcycle gang representing approximately 1% of the membership of the Columbia Amateur Radio Club.

In all, 22 contacts were logged, mostly on 6 meters. We had a decent band opening that resulted in CW and phone Qs as far north as Canada, and as far south as Puerto Rico. Two meters was largely dead, save for some locals and a gentleman up near the border of Tennessee and North Carolina (we contacted him on both bands). For the three of us, it was our first time working 2m SSB/CW, and the fact that we made any contacts at all out in open water was amazing. 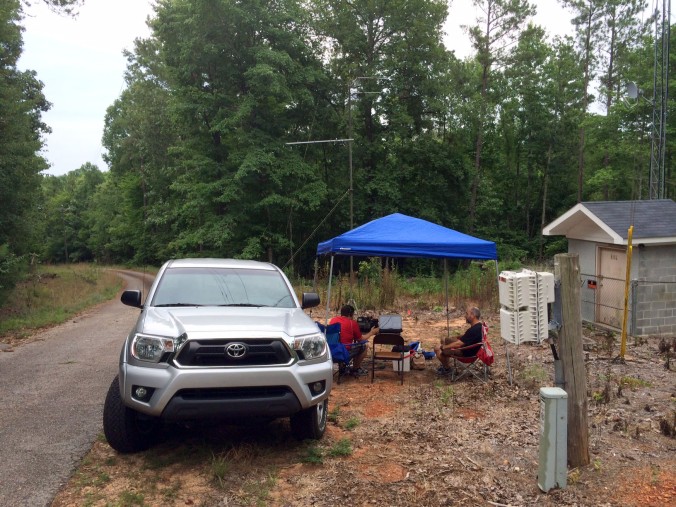 Grey skies and occasional rain made for some cooler temperatures on top of Little Mountain.