I’ve been slacking on my ham radio duties because I’ve made a commitment to learn Python (or at least learn enough to do something useful with it, more on that later), but radio has still been at the forefront of my various hobbies.

Exhibit one: A page from astronaut Clayton Anderson‘s new book, The Ordinary Spaceman.

I had an amazing opportunity last week to meet Clay and hear him talk about his time with NASA. I got in line to get him to sign my book, and I asked him about his use of the amateur radio station onboard the ISS. I wanted him to sign with his personal callsign, and it seems he left out a letter, but he was pretty busy signing books and taking time to talk to everyone. We also chatted about watches in space, and he told me he used one of the newer Omega Speedmasters with the digital/analog display. He also told me he was an ambassador for Giorgio Fedon watches (I’ve never heard of this brand), and was sporting a really cool chronograph from the company. 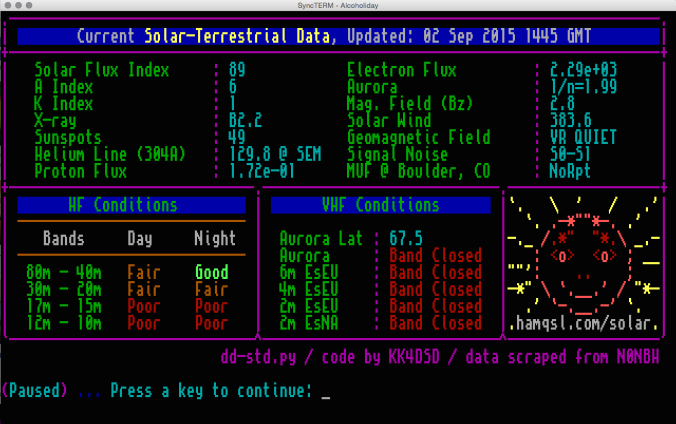 I woke up last Saturday with this idea in my head. But some background… I’ve recently put my old dial-up style bulletin board system (BBS) back on telnet, and since it runs on Linux, I can do some interesting things like run Python scripts right from the BBS. I want to create an entire suite of ham radio-related tools for the board, and I thought it would be fun to re-create Paul, N0NBH’s ubiquitous solar-terrestrial data widget as a BBS application.

A couple hours later I had the basics down, but I was struggling to bring in the HF and VHF conditions data in a pleasing way. I came back to the script Monday afternoon with a few new ideas and discovered a few different methods for dealing with Paul’s XML feed. I wanted to color-code the band conditions like the N0NBH web widget, so I learned a few new tricks to accomplish that. I also intend to change the sun graphic according to solar flux conditions, e.g., low SFI results in an “unhappy” sun!

I also created a tool to display the latest SOTA spots, and I’m nearly done with a QRZ.com lookup gadget that will hopefully present callsign data in a pleasing way. I’ve sort of halfway hacked together a DX cluster thing as well.

So I’m going forward learning Python by applying it to technology from 20 years ago. The irony is not lost on me.

I have been asked to give a presentation at our club’s October meeting, so I suggested maybe I could take a look at the new digital mode recently profiled in QST, “Fast Simple QSO” or FSQ. I played around with the software on the 30 meter band Sunday and it’s definitely unique.

FSQ attempts to create a “chatroom” or IRC-like environment. First of all, you don’t tune around to find FSQ. You go to the assigned frequency for your particular band and you “hang out there” waiting for action. You don’t live-type as with RTTY or PSK. You enter text in a box and hit enter. If the software doesn’t detect any signals on the “channel” it will key up your rig and send your message.

There’s some other neat stuff you can do, such as send SSTV images and query other users in interesting ways (For instance, you can query another user for his station information, what other stations are hearing him, an automated signal report, etc.

It’s a really intriguing mode that I have barely scratched the surface on.